On a chilly, sunny morning in mid-November, Turner Station community leaders grabbed shovels to finish planting the last of 140 “witness trees” behind a row of homes in their historically African American community.

Witness trees typically are giant hardwoods that have stood for decades or even centuries at the sites of battles and other noteworthy or tragic events that took place around them. In this case, the saplings planted at Turner Station – including oaks, gums, sycamores, hawthorns and sweetbay magnolias – represent a down payment on the community’s future.

Founded in the late 1800s when housing was segregated, Turner Station was home for many Black families whose members worked at the Bethlehem Steel mill across Bear Creek on Sparrows Point.

But the population dwindled from a peak of 10,000 in the 1950s as steelmaking declined and finally ended.

Residents of this community just outside Baltimore are pushing now to reverse decades of neglect while also dealing with increasingly frequent flooding from heavy rains – a problem likely to worsen with rising seas. 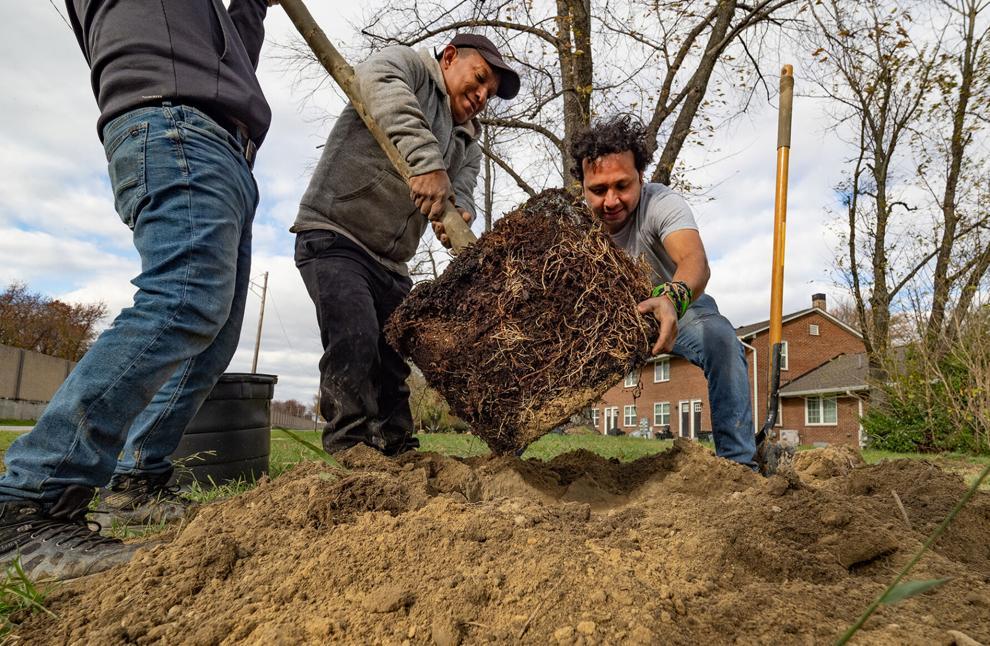 Nelson Perez, center, works with Manuel Martinez, right, and Doria Orbenez to wrestle the root ball of a sycamore into the ground at Turner Station. (Dave Harp)

The trees, along with nine “story posts” and three “memory benches,” mark the first phase of a larger undertaking aimed at making Turner Station more resilient against climate change, fostering a new generation of community leaders and honoring its rich legacy.

“The trees we plant here will do what they do best – combat climate change, add beauty, clean the air, cool streets and homes, and hopefully stand for generations to come,” said Michael Thompson, vice president of the Turner Station Conservation Teams, an all-volunteer nonprofit group dedicated to reviving the community.

This story was first published in the Bay Journal (12/13/22). For earlier Brew coverage:

All but a couple of the trees were planted by a contractor hired by the county. Funding came via a $95,000 grant from the Chesapeake Bay Trust as part of Maryland’s effort to plant 5 million trees statewide. Several other funders provided the rest of the money for the project, which totaled around $250,000. 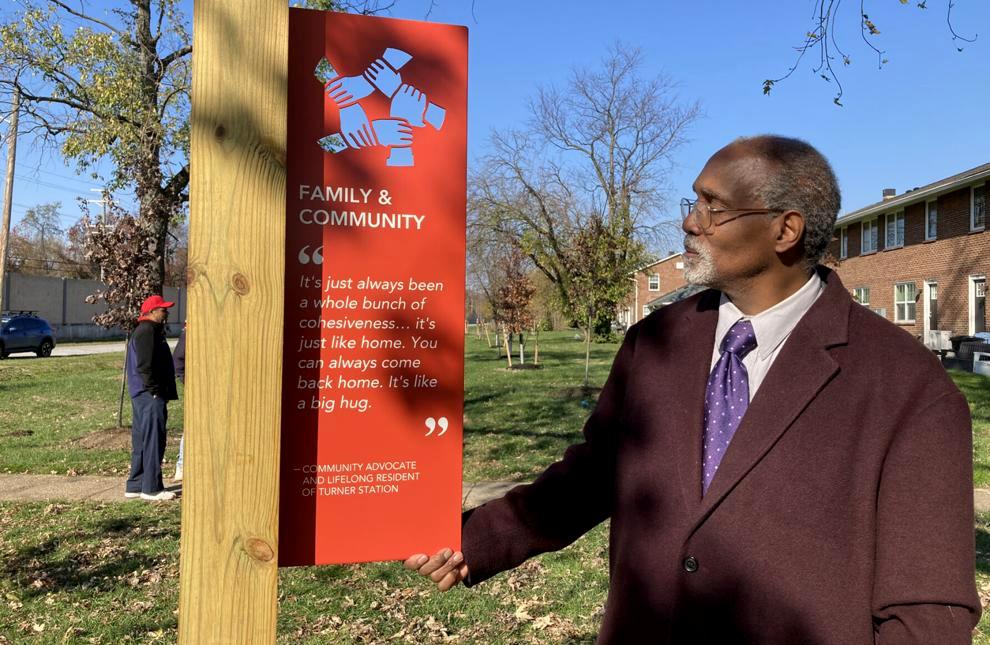 “Trees do everything for us,” she added, noting that they’ll reduce noise from the nearby highway.

The story posts hold placards bearing uplifting comments about the community, gleaned from oral history interviews of residents. The benches and an outdoor stage installed at the church, where a community theater once stood, are meant to encourage storytelling and other performances by residents recalling the notable people who’ve lived and, in some cases, still live in the community.

“We’re doing this for those [generations] to come,” Thompson said, “and, hopefully, they will embrace it and will be emboldened to do something special in the future.”

The Nature Conservancy also supported the Witness Trees project because it fits in with the group’s goals of promoting equitable access to nature and nature-based climate adaptation, explained Isaac Hametz, the conservancy’s Baltimore program director.

In Baltimore and elsewhere, people of color have been systemically excluded and “othered” from the environmental movement, added Andrea Van Wyck, the conservancy’s Baltimore Program community project manager. The organization has made a multi-year commitment to address this injustice locally, she said, by providing funding and technical assistance to Turner Station to pursue goals it sets for itself. 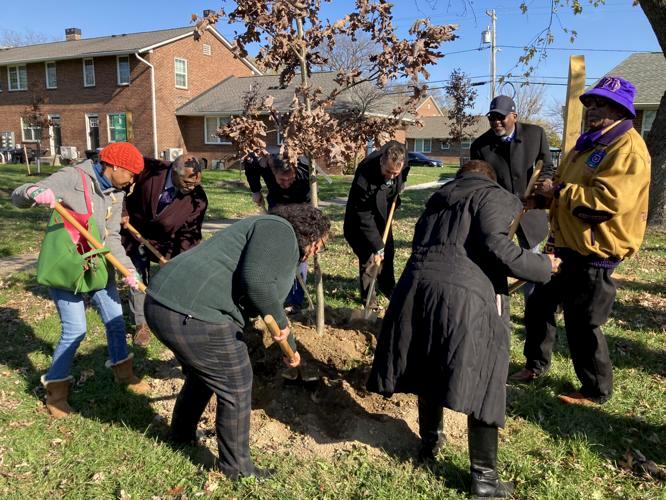 Turner Station residents plant the last of 140 trees and shrubs installed as part of the witness tree project. Baltimore County Executive Johnny Olszewski, behind tree, joined them. (Timothy B. Wheeler)

Hametz has prior ties with Turner Station. Before joining The Nature Conservancy, he worked for the landscape architecture firm Mahan Rykiel on a plan to restore the shoreline access and playgrounds at Fleming Park. That project is still in the works.

Now that the saplings are in the ground, the conservancy hopes to recruit and train young residents to care for them, in the process earning certification as landscape professionals “so they can get paid to do some of that work in the community,” Hametz explained. The county only provided funding to care for the trees for one year.

Project partners also want to develop a new crop of community talent to succeed the aging leadership of the conservation teams. The plan is to engage younger residents in drafting a strategic plan that would express their goals for the community.

“Most of us are over 60,” noted Thompson, the group’s vice president. “We’re not disappearing, but let’s see what the next generation can do. That’s what we’re trying to do, find the next bright voice.”

“Most of us are over 60. We’re not disappearing, but let’s see what the next generation can do”  – Michael Thompson.

Development of new vision and leadership for Turner Station could be critical, Hametz said, as Baltimore County considers how to deal with the community’s flooding problems. The county recently received a $500,000 grant from the National Fish and Wildlife Foundation to work with residents on a climate resilience plan that improves stormwater management and provides aquatic habitat.

In the long term, Hametz said, The Nature Conservancy hopes to map a way to support similar projects in Baltimore city and county in the lower Patapsco River watershed.

In the meantime, as they look to the future, Turner Station residents are reveling in the enhancements to their neighborhood.

“Who knows what this community is going to look like 20 years from now?” Thompson said. “But these trees will still be here.”