As taxpayers brace for a potentially huge bill to fix the water pipe that burst beneath Charles Street this week, they should consider the price tag of the East Baltimore sinkhole caused by a collapsed storm-drain tunnel last July.

In an internal report reviewed by The Brew, Rudolph S. Chow, chief of the Bureau of Water and Wastewater, now places the sinkhole cost at $7 million – more than double the original estimate – as contractors struggle to contain damage caused by two subsequent collapses along the 2300 block of East Monument Street

Together with the recent Charles Street water main rupture and a splintered water main that closed Light Street this summer – and cost more than $1 million – the city is facing a rising tide of unanticipated infrastructure costs.

On Wednesday, the Board of Estimates passed, without comment, a $3.45 million “emergency procurement agreement” with American Infrastructure-MD, to install a 9-foot-diameter steel pipe through the damaged portion of the Monument Street storm tunnel.

This spending comes on top of $3,003,998 already billed to the city by contractors tasked with repairing the sinkhole and tunnel, and does not include a contract – which could reach $300,000-$400,000 – with Seismic Surveys Inc., which is monitoring ground vibrations associated with the repair work.

Excerpt of report by Rudolph Chow regarding the costs, so far, of the Monument Street sinkhole.

The Chow report also does not include the direct costs of deploying city employees at the site, or the prospect of damage claims and potential lawsuits.

The sinkhole is located in the heart of a commercial district lined with small businesses, many of them black-owned and operated.

The shop owners have spent the last three months battered by heavy machinery rattling old buildings, periodic shutdowns of water and gas, and the full closure of the block to cars and delivery trucks.

Last month, vibrations from the machinery caused the opening of a third sinkhole on the block, which increased the amount of right-of-way on Monument Street to be repaired to more than 400 feet.

What’s more, heavy rains have bedeviled the repair work, according to Chow’s report. Three major storms since July “have set back and delayed repair efforts by washing away fill material; further undermining the subsurface, requiring extensive dewatering and increasing the size of the sinkhole.” Tropical storm Sandy did not cause additional damage.

The firm will install a 9-foot-diameter steel pipe inside the damaged tunnel, working through a shaft that has been dug at Monument and Montford Avenue. The original tunnel is brick lined and dates back to 1893, according to city records.

Located 60 feet beneath the street, the tunnel collects storm water from about 700 acres of East Baltimore and conveys the water underneath Lakewood Avenue to the Harris Creek outfall at Baltimore Harbor, which is located immediately south of the Safeway grocery store in Canton. 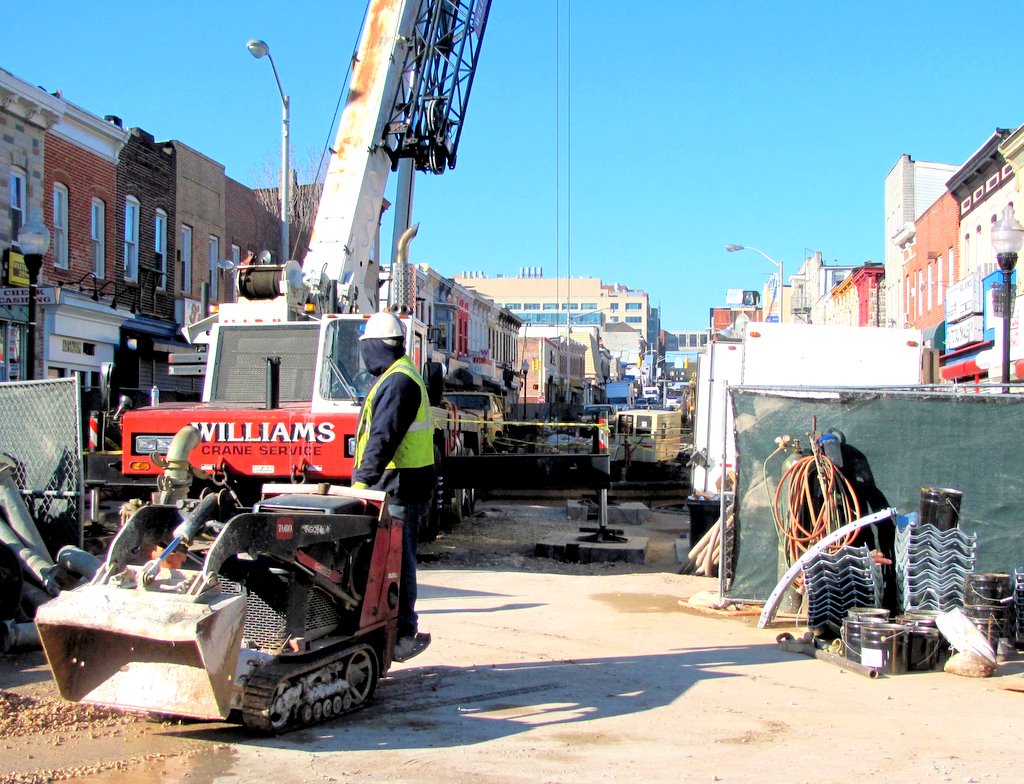 Monument Street today near the shaft where the steel tunnel lining is being installed. In the background: the Johns Hopkins Hospital complex. (Mark Reutter)

Once the new lining is completed beneath Monument Street, city, BGE and Verizon crews will come in and repair or replace water, sewer, gas, electrical and telephone lines disrupted by the construction.

EWOs for Some Costs

Chow estimated all this work can be completed by December 15 – if subsurface conditions and the weather cooperate – and the street restored to full use.

As to the current $3 million in invoices for repairs, the bills will be paid through Extra Work Orders (EWOs) on existing contracts, according to Chow. A major on-site contractor is Spiniello, which has numerous contracts – and even more EWOs – with the agency.

Kurt Kocher, spokesman for the water bureau, said these bills have not been prepared and submitted to the Board of Estimates.

Regarding this week’s water main breakage under Charles Street, Kocher reported today that crews have stopped the flow of water. They are draining the site and removing chunks of asphalt broken up by the force of the released water.

Because engineers have not gotten a close look at the damaged pipe, located 17 feet below street level, there is no estimate yet of the potential cost of the repairs, Kocher said. 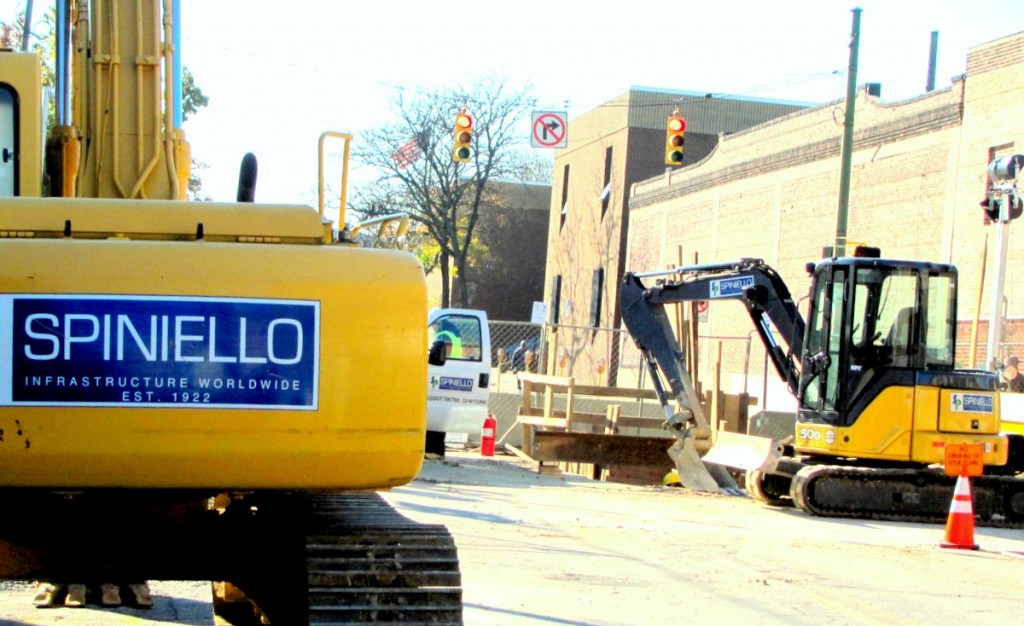 Spiniello equipment works near the west end of the sinkhole at Patterson Park Avenue. (Mark Reutter)