Baltimore says it has fixed its well-known water bill problems – grossly inaccurate bills, haphazard record-keeping, a dysfunctional bureaucracy – but reports from city customers suggest that debugging the long-troubled system is no easy task.

Take the case of Jacqueline Robarge, a Remington homeowner who recently found herself facing a $65,469.50 quarterly water bill.

“It’s not even possible I could have used all that water,” said Robarge, telling her story to The Brew.

We took Robarge’s story – and the complaints of other residential customers – to city officials who say they are doing what they can to address the continuing complaints highlighted in a harsh 2012 water department audit.

(It showed the agency overcharged more than 38,000 area customers in three years – and that customers who were over-billed were reimbursed only if they filed complaints with the city.)

“With reasonable evidence that there was an error on our part, the customer will receive relief,” said Kurt Kocher, spokesman for the Department of Public Works.

How do the customers receive this relief? Often through face-to-face conferences at the Abel Wolman Municipal Building downtown. The DPW’s water bureau averages 12,000 such conferences a year, according to Kocher.

“Even in cases where the problem relates to an issue on the customer’s property, e.g., a broken water service line or a toilet that is constantly running,” he said, “relief is granted if the customer provides evidence that they have fixed the problem.”

Robarge was shocked and dismayed when she got a $60,000-plus water bill for her 14-foot-wide rowhouse. By way of comparison, the most recent water bill for the headquarters of city schools, a block-long building on North Avenue with hundreds of employees, was $19,000.

Robarge said she has never received a water bill for more than $200 during the nearly dozen years that she has lived in the house. Her block of rowhouses have not yet been equipped with “smart meters” that are supposed to eliminate billing errors.

She contacted DPW immediately and – after being placed on hold for over an hour – got some resolution. An adjusted bill, reflecting more typical usage, arrived in the mail soon after.

But that’s not the end of her story. When the adjustment bill arrived, it had a billing period dated 2013. “It was as if I went back in time,” she said.

The correction accounted for the 2013 date, though the adjustment bill didn’t describe it as such.

While Robarge is glad the astronomical bill has been corrected, she is still nagged by how such a miscalculation could have occurred in the first place.

Kocher replied that billing errors of this magnitude are rare, but offered some explanations for such a wild overcharge.

“It can be a misread on a meter or transcription error. . . It can be a broken pipe losing water underground continuously. It can be a defective meter,” he explained.

“We have a system in place which catches most such occurrences before a bill would reach the customer, but human error can occur.”

In Robarge’s case, he said the chief of the department’s division of customer support and services looked into the cause and it was human error.

“We took appropriate measures with that employee,” he said. “The bill should have never gone out.”

After Robarge got her bill, she took a straw poll among her friends to see if anyone had problems with water billing.

Many of them had – and their experience in trying to resolve the bills were overwhelmingly negative.

“The consensus was, they [the water department] will try to do everything to blame you,” she said. 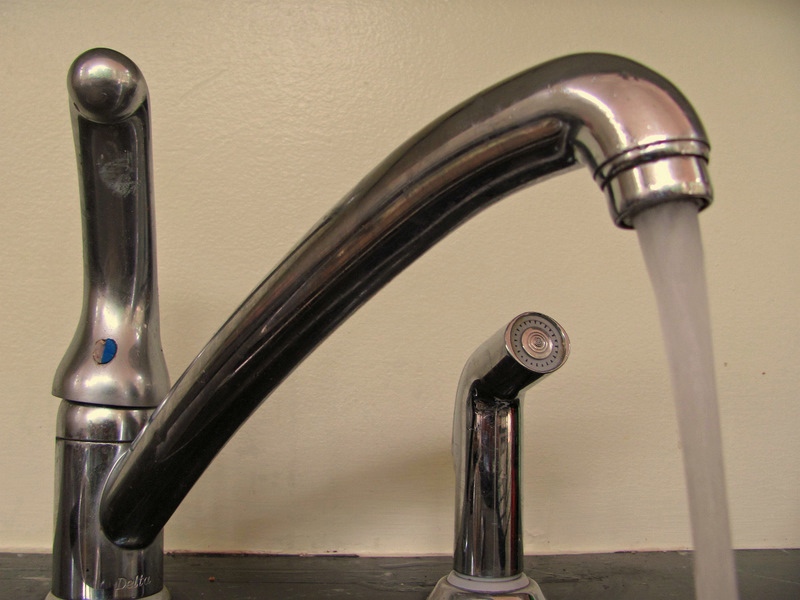 How much the city charges for the water than runs out of your faucets is the subject of 1,000 conferences with unhappy customers per month, a DPW spokesman says. (Photo by Mark Reutter)

“I am lucky my bill was so outrageous. It was obviously wrong. What if this had been $1,000 or $2,000?” she said, adding that her heart goes out to those who are over billed for less ridiculous amounts, because they have a harder time making their case.

Jenna Slonaker found herself in just that situation.

When the winter water bill for her Charles Village home arrived, it was three times the normal amount – more than $600.

The single parent said there was no explanation for such a drastic increase, as her usage has been pretty consistent for the last 10 years.

The only thing that was different that quarter was that her pipes froze briefly – like they did for many Baltimoreans last winter.

“But I thawed them out and there was no burst pipe and no leak anywhere,” she said.

Slonaker asked the water department to check her meter. When she followed up with them by phone a few weeks later, she said they told her nothing was wrong with her meter. “Basically, it was, ‘We think it’s fine. You gotta pay. You must have a leak somewhere.’”

The steep bill was a hardship, but fearing the wave of recent service cut-offs for bills over $500, Slonaker paid it anyway.

But when Slonaker got her next bill, she felt vindicated. It was a normal quarterly bill.

“If there was a leak, it would still be leaking and the bill would be just as high,” she said. “What is responsible for the spike? I don’t know. We’re relying on the water department to be truthful and honest, but I feel like I’m being bilked and I have no recourse.”

Kocher said customers who dispute their bill after an internal departmental review do have recourse via independent arbiters through an informal conference process.

And that is what Slonaker will have to do.

Kocher said her meter read was verified with a “check read,” which showed the reading was correct.

This “shows that somehow that amount of water was being used. Maybe she had a constantly running toilet or is not telling about some leak she had repaired,” he said,

Slonaker, he said, will have to schedule an informal conference and come in and challenge the bill.