City records show that Wes Moore, the Democratic Party candidate for Maryland governor, and his wife have paid their delinquent water bill to Baltimore City.

The Moores now have a $0.00 balance on the account of their Guilford home, according to an update on the Bureau of Revenue Collections’ online payments site that shows a $15,000 “last pay amount.”

Campaign spokesman Brian Adam Jones said the online portal had required multiple payments to cover the couple’s debt, “which is why the website is showing the last payment amount as less than the full balance” of $21.200.26.

Hours after The Brew disclosed on Wednesday that the couple was heavily in arrears on their water bill – and had failed to make any payments for the last 18 months – the campaign announced that they had paid the full amount “out of an abundance of caution.”

Jones did not dispute the accuracy of the bill or explain how the Moores had gotten so far behind on their payments, which are mailed monthly to residential and commercial water users in Baltimore City.

Jones later told the Baltimore Banner that the candidate was not aware of the outstanding bill until Wednesday.

Moore took up the same line of defense on Thursday, telling WJLA-TV in Washington that “as soon as we found out about it, we paid our bill and took care of it.”

The accuracy of Baltimore’s water billing system has been under dispute for years, with sometimes wildly overstated readings and at other times no billings at all.

There is no public record of the Moores ever disputing their water bill.

There is no public record of the Moores having ever disputed their water bill or availing themselves of the Department of Public Works (DPW) appeals process.

Mayor Brandon Scott’s spokesperson said the city will not release the history of the couple’s water billings since they purchased the Guilford house in 2017.

“DPW does not comment on matters pertaining to individual accounts,” said Monica Lewis. “While you believe your readers would be interested in certain matters, we believe in respecting the privacy of our customers and will continue to do so.”

Below is the publicly available information on the Moore’s water account as of Wednesday, October 5, and on Saturday, October 8.

The first statement shows the couple owed $21,200.26 and had not made any payments since March 31, 2021. (The statement does not indicate how long the Moores may have failed to make full payments prior to that 2021 date.)

The second statement, which replaced the first online yesterday, shows the couple’s current balance at $0.00. 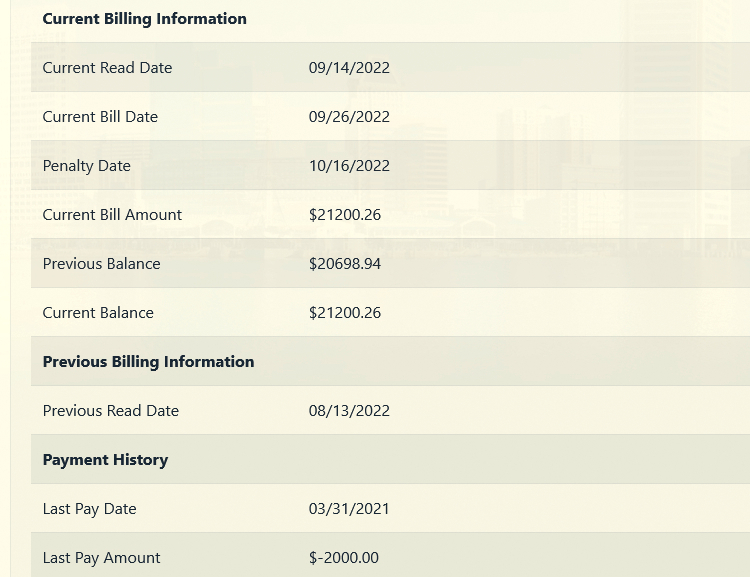 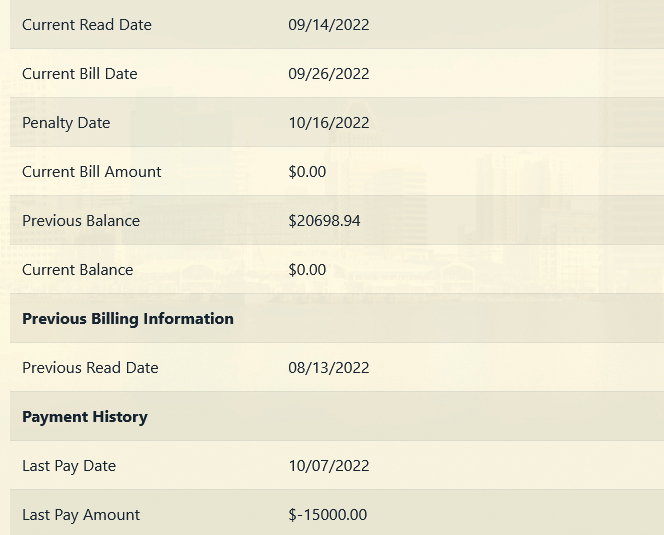